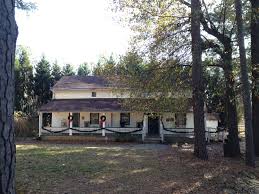 Originally home to Creek Indians, John L. Evins began a large plantation in the area now known as Brookhaven in the early 1800’s.  Prior to the Civil War, ownership passed to Solomon Goodwin, then to Salson Stovall in the late 1800’s. Nearly all of what is now the Historic District developed on land owned at one time by Goodwin and/or Stovall.

Around 1900, prominent Atlantans began building summer cottages in Brookhaven (it was still too far for a daily commute to Atlanta).  In 1910, a group of investors from the Mechanical and Manufacturers Club purchased the land making up the Country Club property and lots immediately surrounding it for a development called "Brookhaven Estates."  The Brookhaven Country Club was incorporated in October of that year. Herbert H. Barker, a golf pro from Garden City, Long Island, was hired to design the course, with nine holes laid out in 1911. (Barker also designed the Druid Hills Country Club’s course.) In January 1912, the Brookhaven Country Club opened as Atlanta’s second golf course after East Lake (1906).

Both the Druid Hills course and the Ansley Golf Club opened the same year as the Brookhaven Club, but these were additions to existing neighborhoods developed a number of years earlier.  Brookhaven is distinct in being the first community in Georgia, and probably in the entire southeast, designed around a golf course.  Efforts to retain existing trees, particularly pines, set a precedent followed by many of Atlanta’s post-World War II housing developments.
Atlanta’s Capital City Club leased the Brookhaven Country Club in 1913. When the Capital City Club purchased the Brookhaven Club in 1915, the golf course was expanded from nine to 18 holes. The clubhouse dates from 1928. The Brookhaven Estates Company continued to sell lots around the club through the 1920’s.  In 1915 there were four houses; by 1928, there were 19 houses surrounding the club.

Development continued when lots along Club Drive and Stovall were offered for sale by Samuel Stovall, Salsom’s son.  By 1928, eight houses had been built on these lots. Country Club Estates (Winall Down Road, most of Vermont and Stovall, Calvert Lane and part of Narmore) was laid out in 1929.  The Carleton Operating Company land (Bellaire Drive) was platted in 1936. 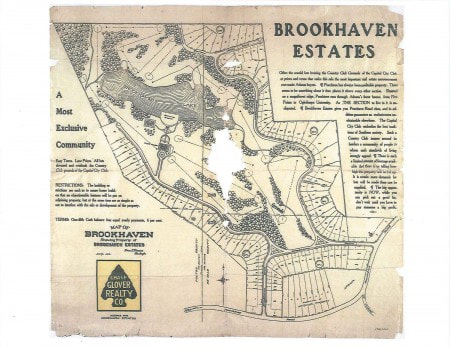 Most homes in Country Club Estates and on the Carleton land were built during the Depression and before 1942.
In March of 1984, Brookhaven resident John R. Brannen submitted a Historic District Information Form on the neighborhood to the Historic Preservation Section of the Georgia Department of Natural Resources.  Through Mr. Brannen’s and his wife Bettie’s efforts, the Historic Preservation Section filed for listing Brookhaven in the U.S. National Register of Historic Places in December 1985. The National Park Service named the Brookhaven Historic District on January 14, 1986.